THE UNFURLED WINGS OF AUTISM: KEVIN HOSSEINI AND PAINTINGS OF LIGHT

On September 12, Kevin Hosseini received an Award for Excellence by Ambassador Jean Kennedy Smith in Washington D.C., where his stunning painting “Bus or Cycle” was put on display at the Smithsonian’s Dillon Ripley Center. Ambassador Smith, the last Kennedy in the generation of John, Robert and Edward, had this to say: “Kevin has been an active member of Hidden Wings since its inception. Kevin’s mother was part of the small group of parents who designed the school back in 2007-2008.” They make quite a mother and son team, exemplifying the family nature of Hidden Wings. Kevin has been a prodigious painter since age 9, whose paintings have twice won the VSA award, and in 2011 he was honored with an award for Visual Artist 18 and under by Naturally Autistic in Vancouver, Canada.
An Artist Arising

When you visit the new Hidden Wings center you will see Kevin’s luminous paintings on all our walls. He paints with a great love of texture and color, and they make Hidden Wings truly come alive with canvasses of Butterflies, Tropical and mountain scenes. You might also see Kevin at our drumming sessions by the shore, or kayaking in the ocean, or a hike on Grass Mountain.

Meanwhile, Kevin’s mother, Debra, for the last decade has been gathering (via electronic images) the work of artists with autism from around the world. Paintings, animations, and other art forms arrive almost daily from Australia to Brazil, the Ukraine to Iowa. Her organization “The Art of Autism”, whose mission is to bring awareness about the artistic gifts of people on the spectrum now receives daily submissions from all continents. She has published two books showing the prodigious talent of autistic people throughout the world:  Artism:  The Art of Autism: Shattering Myths (Autism Today, 2011) and The Art of Autism:  Shifting Perceptions (The Art of Autism, 2012). Debra also organizes, from her modest home in Carpinteria, art exhibits throughout the United States and Canada. She is truly at the center of a galaxy of talent, and she works very hard to build local communities through her unique access. Receiving Recognition Debra and Kevin are both extraordinary, and embody the ideals of Hidden Wings. Parents have designed the school for the lifting up of the talents of every young adult in the school. If you come to the Hidden Wings Center you will find many other extraordinary examples of art: drawings, computer generated images, a novel. Nearly all of our students share a love of art. And through the celebration of Kevin’s achievement all of us celebrate the unfurling of the Hidden Wings of art from such uniquely gifted people around the world. See below photographs of those present to celebrate the installation of Kevin’s painting, “Bus or Cycle” at the Smithsonian: Ambassador Jean Kennedy Smith, Congresswoman Lois Capps, Kevin and Debra Hosseini, and Librarian of Congress James Billington. 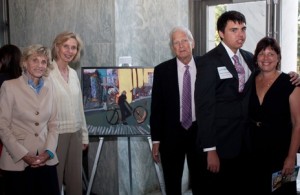 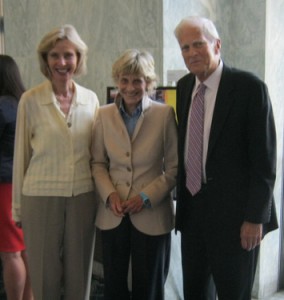 Kevin Hosseini was chosen as the recipient of the 2011 International Naturally Autistic® People Award for “Community Achievement”. This fantastic, ground-breaking and history-making event captured the essence of the growing global autistic community, demonstrating their strengths, talents and abilities.