Drumming Beneath the Milky Way

Two of our students visited our home last week, late at night. Like many autistic youngsters sleep comes with great difficulty. They were brothers, in their early 20’s. They were very disturbed. Here are the notes I sketched about the hour or so we spent together.

One advantage of living in the country is that there are no street lights. On a clear night you can see the Milky Way span the entire sky, giving the world this incandescent glow.

I was watching the sky late at night when the doorbell rang. It was two of our students.

They were brothers, 21 and 22. They could not sleep (fitful sleeping is one of the burdens of autism). They came in, sat at in the living room couch. They rocked back and forth, making those guttural sounds. They clenched their fists. Shivered. Twitched. Paced back and forth. It seemed as though their disturbance fed each other.

I tried to talk to them, play soft music to them, sit close but not so close, and give them something to eat. Nothing worked.

I had two of the Not-So-Loud drums in the room, and put them in front of the boys.

The drums were familiar to them, we play them all the time: in my garage, at the beach, in the mountains, in the park – when our students all gather. But these boys were always in the background. They did not participate.

One of the boys started pounding the drum, as though all his frustrations went into the skin. If the drum had sent back a loud, bright noise, his anxiety would only have increased. Instead the drum responded with a heartbeat. The one elemental sound that autistic people realize in one another. The heart beat went on.

The other brother took the other drum. He just put his hands on it. Then put his ear to it. Then tried to put it on his head.

Then the first boy stopped drumming. He picked up the drum, hugged it to himself as though he was hugging a baby, and rocked from side to side. But not rocking from frustration. Rocking as though he had discovered a heartbeat that could communicate with his own.

The other boy began to brush his hands over the drum like silk. He seemed almost hypnotized by the movement. Back and forth, lightly with his slight hands.

This went on for almost a half hour, alternating with tapping, kissing, walking away, coming back, drumming once or twice, relaxing. Systolic and diastolic.Both of their hearts seemed to be beating in counter pose.

Their demeanor changed. They did not twitch or groan. They were still. They still did not establish eye contact. But they seemed to sink into the couch, with these new found echoes of their inner selves.

Then all at once they stood up, and they walked towards the door.I walked them home. No need for a flashlight.
Then I was treated to one of the great moments we all experience with these unique people.

When briefly they break from their crysalis and their hidden wings unfurl. This time, wings of the imagination. 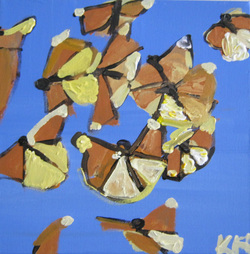 One boy smiled, took off his cowboy hat, scooped his hand into the hat, and acted as though he was throwing something from the hat into the sky.The brothers laughed.They stomped their feet.Then both had their cowboy hats off. They reached into the hat, and acted as though they were scooping something out, throwing it into the sky. And then their hands were out, waving and pointing and laughing, they were throwing their hats into the air, and then spreading out their fingers and arms and pointing.And the image hit me clear as a bell.On the first day of creation some ancient cowboy took his hat, reached in, found a handful of diamonds, and threw them into the air.And so the stars were born.
-Jim Billington, Hidden Wings